We are exploiting a series of continuous nanomanufacturing and nanopatterning methodologies with simple and straightforward principles inspired by well-matured and reliable mechanical machining protocols such as rolling, injection molding, pullout, pressing, indenting, and forging. By realizing scalable and trustworthy production of various small-scale structures and patterns, we head toward commercially-feasible manufacturing from lab-scale fabrication.

Integrating continuous rolling principle to the small-scale fabrication based on nanoimprint lithography (NIL) and photolithography, we develop Roll-to-Roll (R2R) NIL and Photo Roll Lithography (PRL) processes that can be applied to large-area, flexible electronics, photonics, etc. In R2R NIL, as the rolling proceeds under conformal contact between a stamp roll and a substrate roll, the stamp continuously imprints the desired polymer pattern on a linearly-feeding substrate coated with proper, typically UV-curable, polymer resin, finalized by UV curing at the outlet of contact zone. In PRL, a flexible photomask is attached to the hollow quartz roll inside which a downward-collimated UV source is mounted. A photoresist-coated substrate is then fed underneath, under a conformal contact or in proximity, and is continuously exposed to the UV light with rolling to define the pattern. A gentle nature of PRL allows direct patterning onto delicate nanomaterial films such as graphene layers. Controlling the relative mask-substrate motion, the resulting pattern can be maintained identical to the photomask profile, or can be modulated to elongated or shrunken shapes. 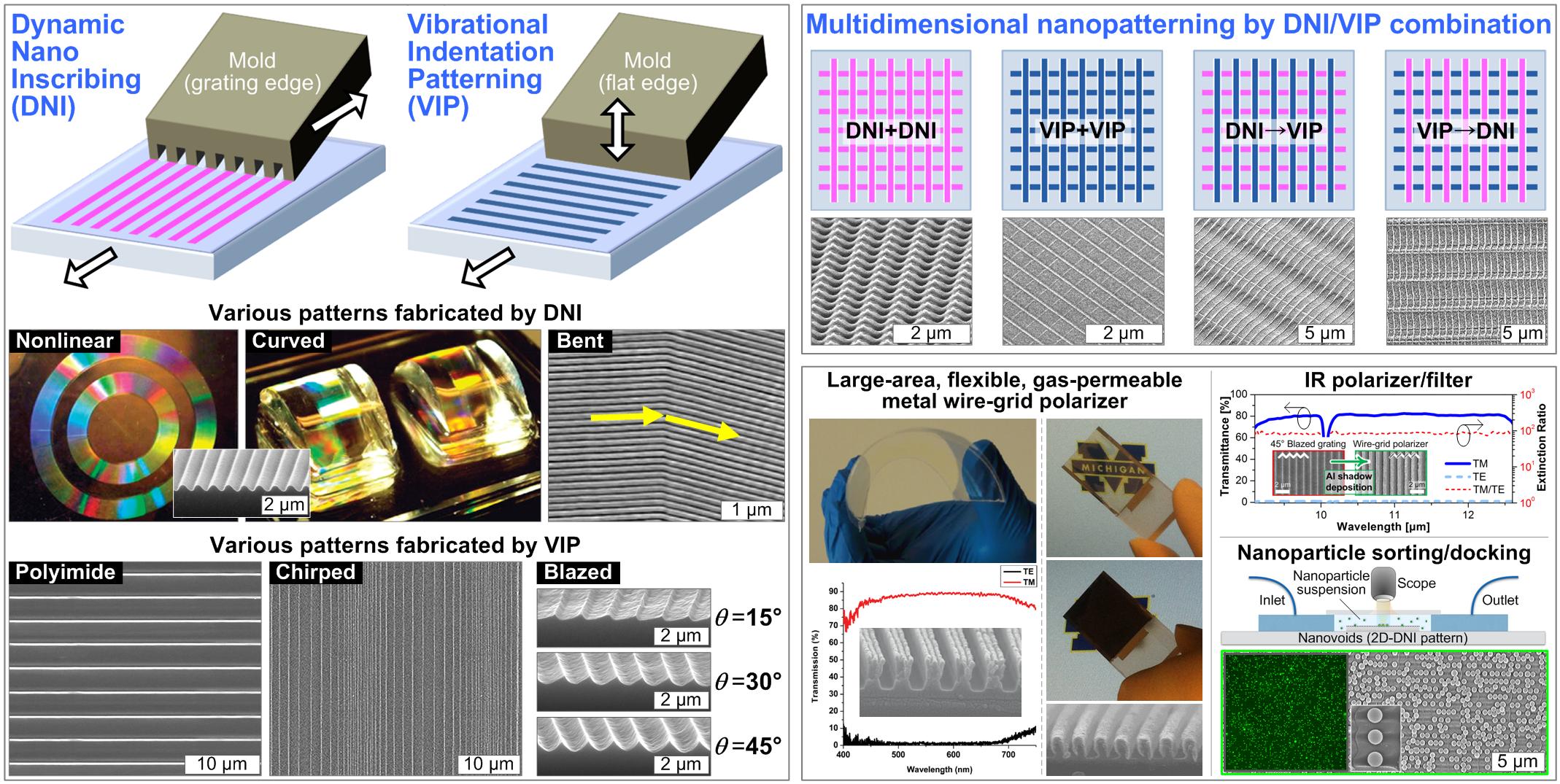 Dynamic Nanoinscribing (DNI) along with NanoChannel-guided Lithography (NCL) realizes continuous creation of seamless grating structures in an essentially indefinite length, by sliding the cleaved flat grating mold edge over a compliant polymer substrate under conformal pressure and proper heating. DNI and NCL can be applied to most commercial polymer films whose resulting pattern profile can be controlled by the localized mold heating and contact force. The nature of conformal line (i.e. tool edge) contact-based patterning of DNI/NCL uniquely enables the continuous patterning along the nonlinear route (e.g., circular, bent) as well as on curved surfaces. Vibrational Indentation-driven Patterning (VIP) achieves real-time, pitch-tunable fabrication of various small-scale grating structures on most polymer materials (including polyimide), by simply utilizing the high-frequency vertical vibration of a rigid flat edge to the periodic indentations of line patterns on a horizontally-moving substrate. By adjusting the tool vibration frequency and/or the substrate moving speed, diverse micro/nano-scale grating structures including pitch-variable chirped gratings and angle-variable blazed gratings can be readily created in a continuous and high-throughput manner. Moving forward, DNI and VIP can be combined in a multidirectional fashion to easily fabricate various 2D and further-dimensional micro- and nanoscale patterns that can be capitalized in versatile electronic, photonic, and bioengineering components.

We are developing the hybrid nanoarchitectures comprising complementary nanomaterials or nanostructures for improved functionality, scalability, and surface area. By assembling multiple small-scale ‘building blocks’ in the hierarchical and/or layered fashion, advantageous properties can be synergetically integrated and drawbacks can be mutually compensated within these hybrid nanoarchitectures. 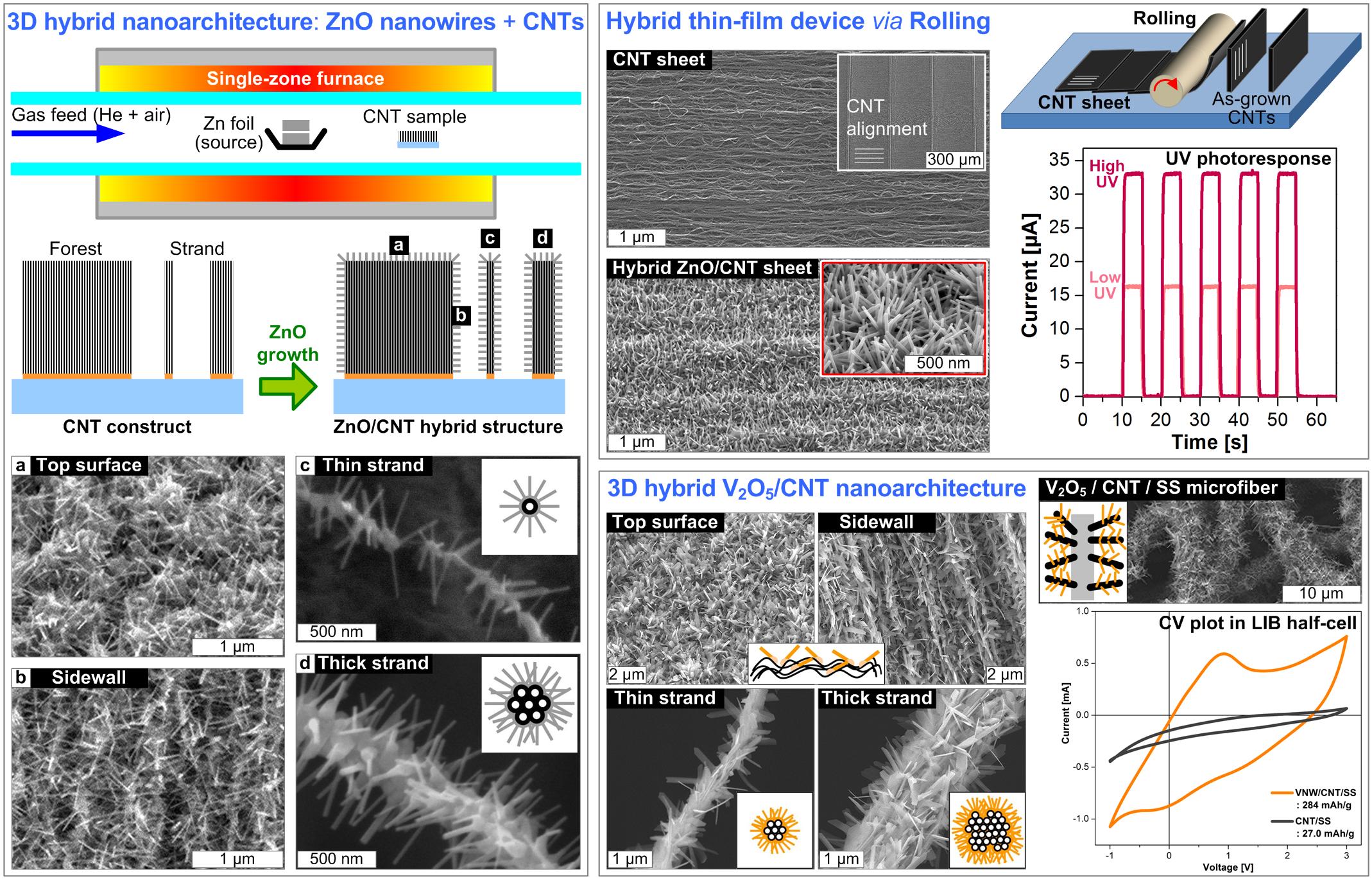 Metal oxide nanostructures made of such as zinc oxide (ZnO) and vanadium pentoxide (V2O5) possess a diversity of useful functionalities including photoelectric and piezoelectric characteristics and large electrochemical intercalation capacity, yet suffer from relatively low electrical conductivity and scalability. Meanwhile, carbon nanotubes (CNTs) have excellent electrical conductivity as well as mechanical/chemical robustness, and can be configured to a wide range of shapes and scales, but lack of some fruitful properties abundant in metal oxides. The three-dimensional (3D) hybrid nanoarchitectures, where ZnO and V2O5 nanostructures are hierarchically assembled onto CNT constructs of various configurations, can lead to more efficient and versatile utilization of metal oxides’ functionalities by the aid of CNT backbone. For instance, the electrons generated inside ZnO upon UV illumination, or the ions and electrons transporting during electrochemical reactions within V2O5, can be more rapidly and efficiently extracted and collected through the electrically and structurally well-bound, highly-conducting CNT frames.

Such hybrid nanoarchitecturing works are mainly based on the step-wise chemical vapor deposition (CVD) procedure where CNTs are first grown in desired formats and then metal oxide nanostructures are formed onto the CNTs with controlled morphologies. Here the aforementioned rolling process can be creatively adopted to topple down the as-grown, vertically-aligned CNTs (like playing dominoes!) to horizontally-aligned CNT sheets which are mostly more beneficial for many thin-film device developments. Further-hierarchical hybridization can also be implemented to expand surface area and applicability, like growing CNTs on porous metallic microfiber fabrics and then growing metal-oxide nanostructures on those CNTs, suggesting our methodology can be translated to other frameworks for wider applications.

Not only as the baseline building blocks for assembly and scaling-up but also as the standalone functional components, are we studying a variety small-scale structures, materials, and patterns. The above-introduced nanopatterns, nanowires, CNTs, and other nanostructures are comprehensively created with various scales, morphologies, and textures, under controlled processes involving NIL, photolithography, CVD, and their combinations. 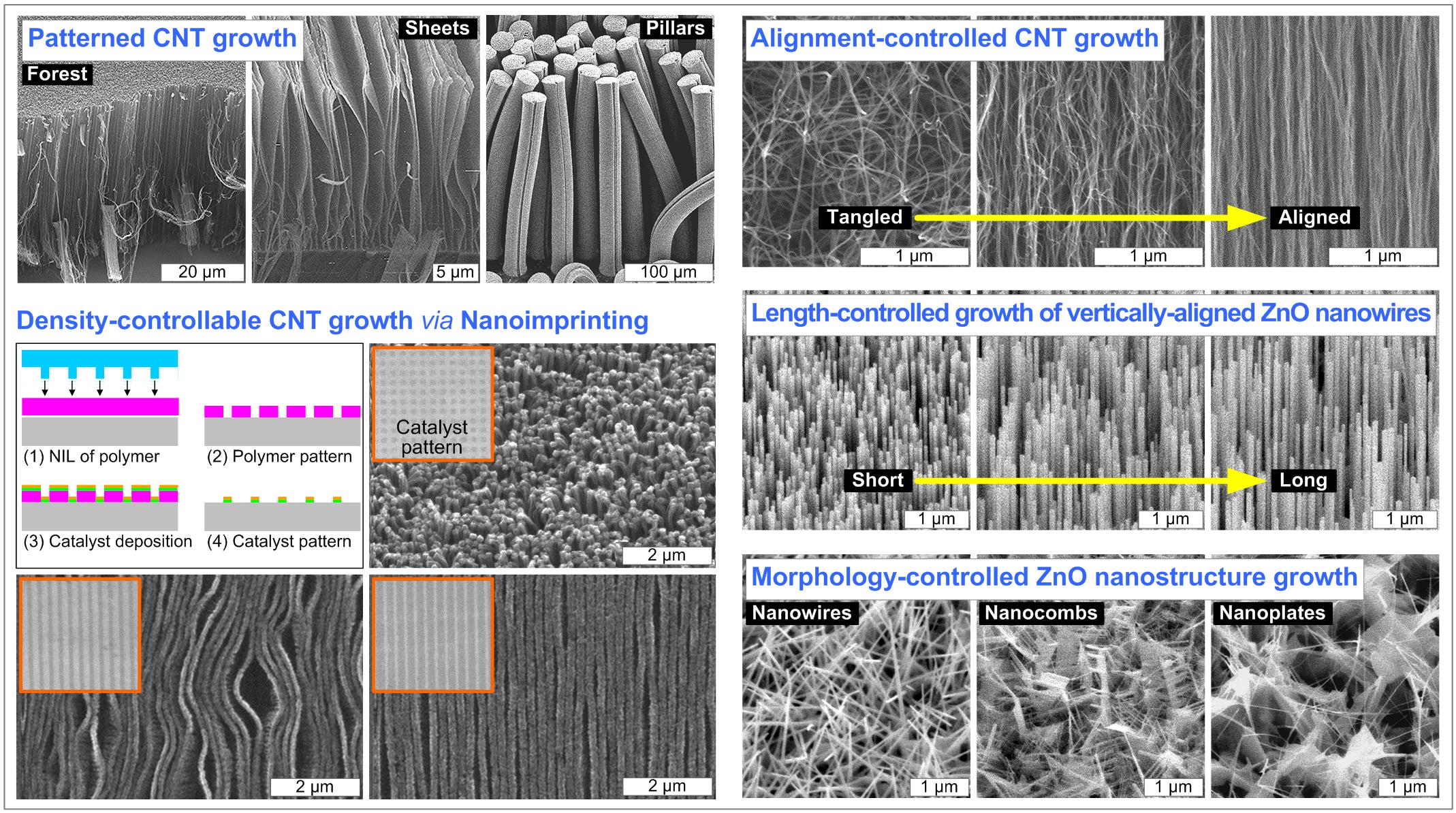 In the furnace under a mixed flowing of hydrocarbon, helium, and hydrogen, CNTs can be grown as a bulk ‘forest’ from the flat catalyst (typically a few nm-thick Fe/Al2O3), or can be constructed to various architectures by patterning the catalyst layer. Here we newly introduce NIL for nanoscale catalyst patterning, aiming for density-controllable manufacturing of CNTs and tailoring the consequent nanostructural properties such as refractive index, thermal conductivity, and wettability. The alignment degree can also be controlled by modulating catalyst composition and growth condition for broader application-specific uses. Not limited to hybrid architecturing with CNT frameworks, the standalone, vertically-aligned ZnO nanowires can be epitaxially grown along the well-known vapor-liquid-solid growth mechanism. The length and morphology can be tuned by controlling the growth time, gas feeding formulation, and process temperature.

Along with such ‘bottom-up’ syntheses of diverse nanostructures, we also extensively work on the ‘top-down’ fabrication of many functional small-scale patterns. Nanogratings, subwavelength dot/hole arrays, micro- and nanoscale meshes, and multidimensional patterns can be made by various top-down nanofabrication techniques including normal NIL, DNI, VIP, and photolithography. The dimension, period, spacing, and shape can be controlled for targeted applications covering mechanics, electronics, photonics, energy harvesting, biological templates, and more.